Knife as a Finnish tradition

In first half of XIX-th century in Finland began the industrial production of knifes, the Finnish masters start to improve the products, doing them to order for gifts, decorating and perfecting details, transforming a knife into a work of art. In 1888 one of such knives was presented to young Nikolay — to the future Russian tsar, and subsequently same master gives already to Emperor Nikolay II an excellent knife, and the tsar, in turn, signs the reading and writing testifying to a great skill of the Finnish author.

The Finnish knives are famous all over the world, here there is a factory which is engaged in manufacturing of knives, there are also masters who know all subtleties of this business. Better to say, the author is the creator, it is possible to see a brand of the manufacturer on each product that speaks about quality of a knife: the blade form, the handle, a sheath with a loop for suspension to a belt — all speaks that the author concerned knife manufacturing with the Finnish carefulness. 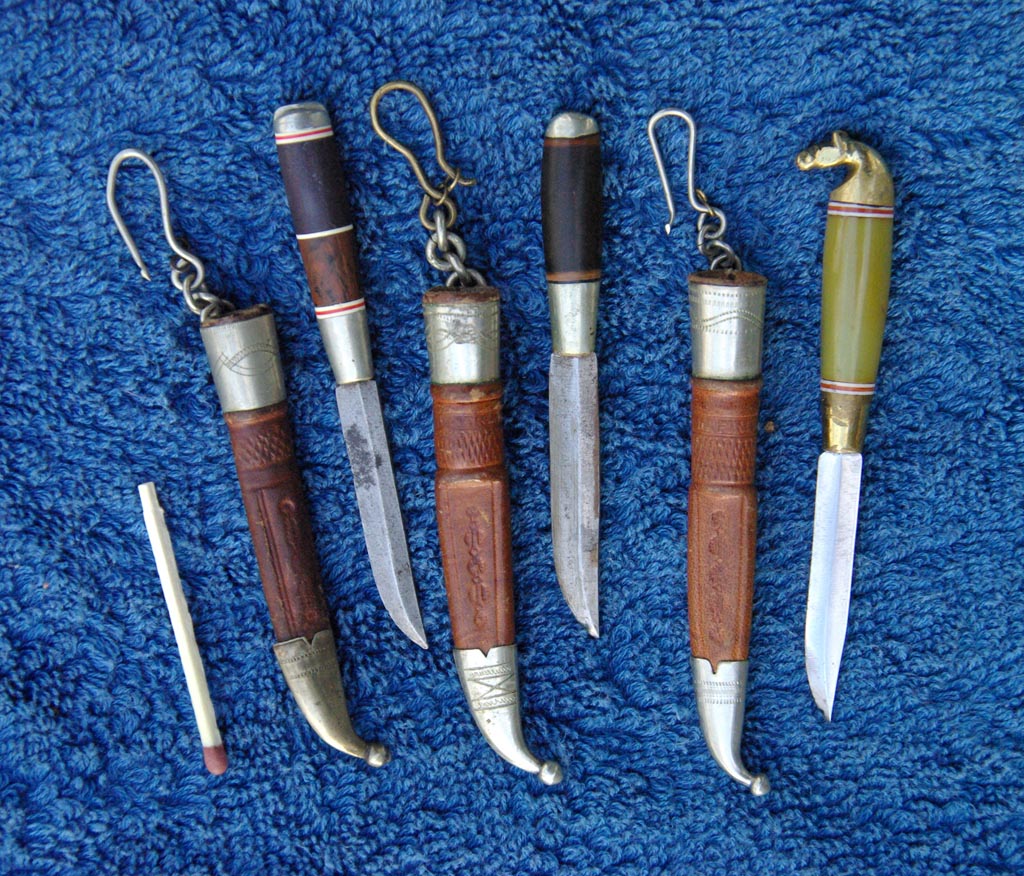 The Finn, for example, as an important detail of a national suit of Sami, underlines its necessity for a life on an extent of centuries. The Finn on a belt at the Finnish hunter as attribute of hunting without which it is difficult to manage in wood. A gun and a knife are the main subjects for the hunter. The Finn for the fisherman is the main tool for cutting fish.

The Finnish tribes lived in severe conditions of the north. Dense woods, impassable bogs, rocks, many wild animals where you have to survive hardly, hoping there is nobody, only yourself— your character, which is strongly shaped. Often the Finnish knife helped in life, always near at hand, which will rescue from an animal, and the fire will help to dissolve, and cut the fish.

The knife made of a horn of an elk, was found in Finland in 1914, and for this knife a lot of centuries speak about this subject of a life of tribes as about important and necessary in an everyday life from the most ancient times. The hunter started to produce a knife from a stone, and already at them time the ancient knife was hung on a belt, further the bone knife which was carrying out more functions, than its ancestor became a primogenitor of the Finn. It was already more convenient to them to undress fish. Horns of elks and deer were used for a blade, such knives could be met at Sami still recently.

The blade at such knives was shorter than the handle, subsequently the blade form has been a little changed. This knife had the direct appointment and was for each owner an instrument of labor, served it constantly, without having any ornaments. With the advent of steel blades and wooden handles, they tried to make them of the Karelian birch as very firm breed of a tree, there are also details on the handle, decorating the knife. Knife presence on a belt at the man is adequate. And it was at all Finns. In Finland there is also a ceremony in which the Finnish knife doesn’t take the last place. If the marriageable girl carries an empty sheath, means, the time has come to send matchmakers. And if the man puts the Finn in an empty sheath — it means, the maiden on customs was held. And that girl who won’t pull out a knife from a sheath, agrees to marry. Well and if pulls out the Finn from a sheath — she doesn’t agree to marry this man. The knife strongly enters into the Finnish ritual of courtship.

Gradually a knife changes its form, it was perfected, a sheath (at first they were made from berest) were also decorated, the knife ceases to be only economic instrument, taking a form of the fighting.

Times have changed, but hardly the man wouldn’t like to have  the present Finnish knife, especialy if he is engaged in hunting or fishery. You will not see today the walking Finn around the city with the Finn on a belt, but everyonehas it, if the season of hunting begins or the Finn sits in a fishing boat.. How to taste Finland  without a traditional Finnish knife? It’s not easy..