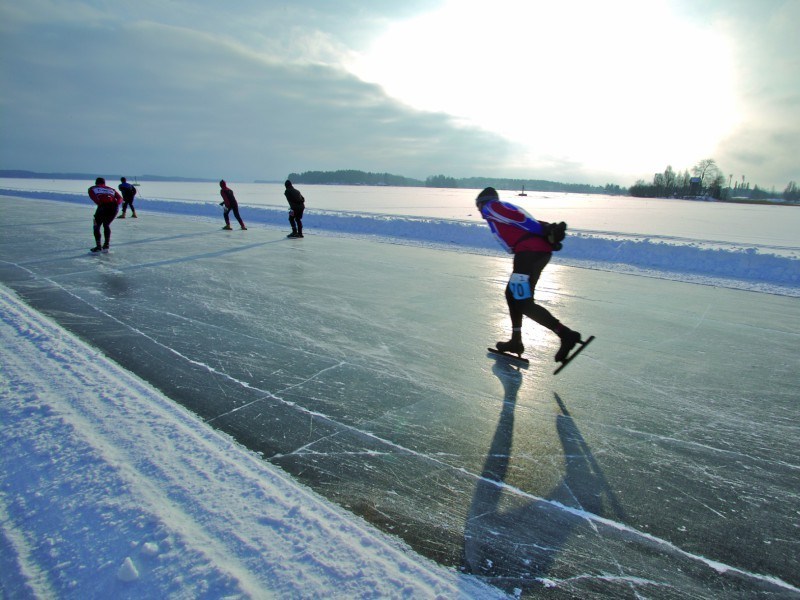 Many years ago, skating across Saimaa in Finland was more means of transportation than sports hobby. Today the skating is a sport and a healthy way of life. On huge lake Sajmamno there are skating routes, ready equipment for fans, good lines, long and short, at times they reach up to 10 kilometers — everything is for skaters. Annually there are new routes.

The price of using routes and equipment is accessible to everyone, children have 50 % of discount, and till 12 years the equipment almost everywhere is free. On extended routes on a line there is a cafe where it is possible to have a rest.
How to dress for such skating campaign?
The most convenient is to have windproof sportswear and a protective helmet. Today there are skates of special, steadier updating, sometimes for fans to be able to run using also ski sticks, if they want of course.
To drive on the beauty to Saimaa in the winter on the prepared line is a pleasure for those who is an expert in sports rest. Around you is the plain snow and magnificent healthy air! Excellent sliding, without any doubt, won’t disappoint fans of skating sports as the ice surface on a route is constantly leveled, the snow-removing technics cuts off the top layer of ice, cleaning all roughnesses and grinding ice.
March is the most excellent month for skating, more and more sunny days, snowfalls are less, and competitions are planned for this time for Saimaa, marathons and long improving walks.
In national park Linnansaari the first route was opened five years ago and is popular at fans of skating, the Saimaa seal living in territory of given national park, safely adjoins to fans of sports.
Fine routes on Pihlajavesi on 20 km and 5 km, on Puruvesi — 8 km, on Pieksjamjaki, Savonlinna, Mikkeli — routes of different extent wait for the skaters. By the spring businessmen want to prepare in vicinities of the city of Savonlinna a network of routes to the extent of 50-60 kilometers on their own expenses.
In summary it would be desirable to tell, many inhabitants of island Finland used the skates, going on the skates affairs, on a visit or behind purchases, and it was an everyday occurrence within many decades, they had routes different in extent. For example, to run on skates from Savonlinny in Varkaus: if you look at a card it is possible to take off a hat as a sign of respect to those people who do this.
P.S. Observance of safety necessarily rules in the spring: while moving it is necessary to observe a distance, take with itself so-called backpacks – floats and a small set of saving means.