Turku Castle: The Masterpiece of the City

Turku Castle is one of the most important attractions in Finland. The main reason is that the castle is considered a national treasure. It’s the biggest castle in Finland and the one hiding too much history within its stone walls.

The castle stands quietly on the River Aura as a historical witness of the Finnish culture. It was built in Turku  in 1280. Ironically, the construction of the castle was initiated by the Swedish conquerors. The primary aim of the building was protecting Eastland, the name given to Finland back then. After a while, houses were added around the castle as well.

The expansion of the castle lasted until 16th century. This is when the building got its final look, which is preserved today. Of course, there were a few renovations, without of which the building would definitely not make it to the 21st century.

The biggest renovation project took place after WWII, more specifically the bombings of 1941. Some parts of the castle were badly damaged. After renovation, the castle was ready to take visitors again in 1961. 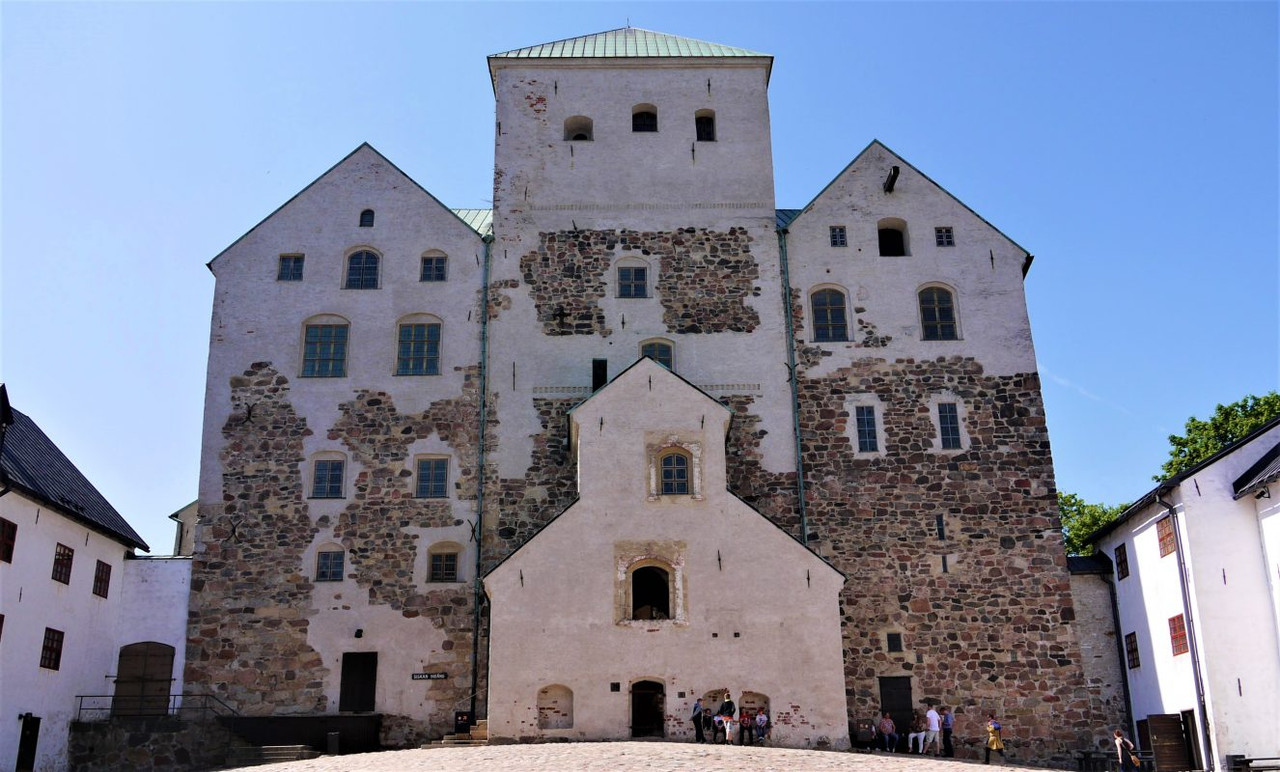 The castle didn’t fulfill its destiny much. It was built for outside attackers, while its main function remained withing the boundaries of internal politics. People would fight for the castle to gain control over the territory. Only Russians made the castle serve to its true aim in the 14th century.

Other than that, there were a lot of governors and other officials that made the castle their seats. It was even used as a prison for a while. Luckily, it hosts Museum Centre of Turku now, so there won’t be a tour through the scary dungeons now.

The museum has been there for around a century. This means that the collection is very promising. There’s literally everything related to the life of Finns in the past few centuries.

There’s also a special exhibition for your kids called Children’s Castle. It represents the scenes of historical Finns, which also happen to be very tiny, dressed in traditional costumes, feasting, serving food, and so on. Obviously, it might end up being more fun than educating, if you don’t teach your children a few things. They will instantly see the castle as a regular doll house to play with.

And this museum is probably the only thing you should look forward to, if you’re an experienced traveler. There are just too many castles in Europe (I guess, Europeans really like to have a lot of space in the house), and the majority of them have incredible and luxurious architecture, which can’t be found in case of Turku Castle. It’s very nice and interesting, but it comes nowhere near the tall Gothic castles you can see elsewhere.

On the contrary, you might come across some really luxurious saunas in Finland. See, every country has got something special.

One of the advantages of this attraction is the choice of going on a guided tour or skipping it. If you’re already familiar with Finnish history, then you can do perfectly OK on your own. Otherwise, their might be a lot of new discoveries if you go on the guided tour. There’s also the middle one. You can buy a guide book from the ticket box and plan your own tour.

Unless you need some freedom for sightseeing, you know, deciding where to go and when to go, the guided tour is very cheap; it’s only €2. Moreover, you’ll have to pay €7-8 for admission, even if you’re on a budget travel and are looking for ways to save up some money, the price for a guided tour won’t make a big change, so you’d better take it. You can walk around as much as you like after the tour.

Make sure to wear comfortable shoes, because the place is huge, and you will have to do a lot of walking. In fact, it’s not just walking, there’s also a lot of climbing up and down.

After you’re done with sightseeing, don’t forget to drop in at the gift shop, which is called Fatabur. Look for some souvenirs to take back home. There are lots of books, glass objects, and so on. There are also replicas of some jewelry from the museum displays. If you have friends that love items with a history, this would be the place to get their gifts.

If you’re get hungry, which you probably will be, there’s Duke Johan´s Cellar to try. Just think about it. Having a nice Finnish dish in one of the most ancient buildings of the country. That sounds something to remember for years.  If you’re not that hungry, just get yourself a cup of coffee. You should also check the calendar of the castle events before visiting. The restaurant often hosts food festivals, which are not to be missed no matter how hungry or non-hungry you are.

You will need around 2-3 hours to walk around the castle and listen to the guide’s speech. The visits to the restaurant and the gift shop will take additional time. As a result, you will most probably spend the half of the day here.

Turku Castle is a great place for tourists who are highly interested in the culture of the country. The walls of this building are soaked in history. In a word, give the castle a chance, you may really start liking this type of Finnish castles, variety is always welcome.